Neurorehabilitation in the ADELI Medical Center is based on the general definition of rehabilitation by the WHO (World Health Organization). Rehabilitation according to this definition consists of a number of medical, social, educational and occupational methods for training or re-training the individual to the highest possible level of functional ability.

Besides our multi-disciplinary approach to rehabilitation, following standards of neurorehabilitation are emphasized in our Center: 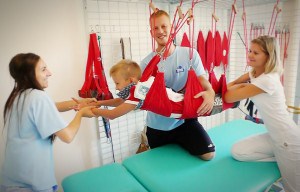 As one of the leading neurological rehabilitation centres in Europe and the undisputed leader in the intensity of treatment, ADELI Medical Center sets a new standard for neurorehabilitation. When it comes to the success in improving health and the quality of life of our patients, “adequate, average, customary” services are simply not enough.

Daily treatment plan includes different intensive rehabilitation methods in an aggregate period of 4 ½ to 5 ½ hours a day, six days a week. Thus, patients receive up to 30 hours of therapy per week.

Individual therapy definitely excludes “group therapy” (a therapist and several patients). At our Center, several therapists and specialists take care of every single patient throughout the day. Every medical case is special in its own sense and therefore requires its own, unique treatment plan. This treatment programme is individually customised and tailored for each patient, based on the consultations between the neurologists, doctors and therapists. 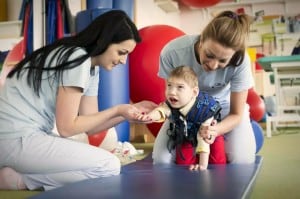 The treatment programme should be created such that it consistently addresses all disorders of the patient. In particular, neurological patients have multiple secondary and tertiary disorders, e.g. spasticity, speech disorders, epilepsy, scoliosis. Collaboration between physiotherapists, speech therapists, neurologists, chiropractors and physiotherapists is required to treat the disorders effectively and holistically.

In medicine, the permanent body sensation and the current perception of body movements is called proprioception. It is the constant flow of information from the body to the brain. It receives and stores these messages continuously and thereby learns to use the power of the body properly in every movement – for example, when standing, walking, eating, grasping, speaking, etc. Compared to the widely used motor rehabilitation, proprioceptive stimulation has a profound effect in the treatment of neurological disorders. This is because proprioception stimulates the nervous system at the point of occurrence of the damage, thus creating a better basis for successful rehabilitation.

Right from birth our brain learns to control the body. This occurs through the exchange of signals between the brain and body.

This learning process of the brain takes a lifetime. This happens in the form of permanent feedback by the so-called afferent impulses (see above). Numerous sensors in the nervous system (proprioceptors) report continuously and in detail about the body’s actions to the brain.

When the brain sends the wrong signals to the body due to damage in the central nervous system, then this is externally observed in the lack of body control, locomotor disorders and sometimes speech disorders. The nervous system constantly reports incorrect information back to the brain, which in turn tries to learn from the distorted signals. In medical language, these signals refer to pathological proprioception.

ADELI breaks this cycle through a series of measures that activate healthy physiological proprioception and provide the brain with the correct information. This is achieved by:

The result: The patients learn to control their bodies.

Apart from ADELI, there is hardly any neurorehabilitation centre across Europe that applies proprioceptive stimulation with such intensity, individuality and versatility. Patients are treated at ADELI on the basis of the latest findings of the Austrian-German aerospace neurology and the Russian space medicine. With the help of up to four specialists, you learn how to sit, stand, walk, eat and speak for several hours a day. You make significant progress and recover the quality of life gradually.

ADELI Medical Center’s use of specialised equipment and procedures is derived from space medicine. This makes the therapy programme more effective for each patient.

The applications have been developed by researchers in the U.S., Russia and Germany to avoid damage to nervous and muscular systems of astronauts. This damage is caused by lack of movement and weightlessness. As in patients with brain injury, the brain of an astronaut “forgets” the right locomotor sequences upon lack of proper input. The stimulation of healthy proprioception is an effective remedy in this case. 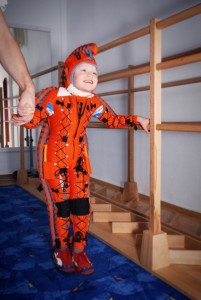 of humans is like a “software” that is permanently integrated into the nervous system. This programme controls each movement in response to the constantly acting gravitational force, in particular, the head and trunk control and the locomotor functions of the legs.

The anti-gravity system is underdeveloped in many patients. In some cases, there are congenital disorders or the programme is damaged after brain injury. Particularly affected are wheelchair and bedridden patients, but also people with limited mobility or balance disorders.

shown by specific exercises from the Russian space medicine with simulated gravity in loading and unloading suits. The German and Austrian space neurology developed plantar stimulation and vibration therapy, which make an important contribution to the success of the treatment.

Hyperbaric oxygen therapy (HBOT) is a treatment method, where the patient breathes pure medical oxygen in an environment of higher pressure than atmospheric pressure. Normally, the air contains 21% oxygen and 78% nitrogen. During the HBOT, the concentration of breathed oxygen reaches 100%, which is thus five times that in the air we normally breathe. At the same time, the operational pressure in the hyperbaric chamber is 2.5 – 3 times higher than the atmospheric pressure. In these conditions, the human body can take up to 25 times more oxygen than under normal atmospheric pressure.

As a result, blocks in the oxygen supply to major body systems are overcome and numerous functions are activated. Even in areas of the brain that are no longer supplied with blood, hyperbaric oxygenation leads to re-oxygenation of the damaged areas and inactive brain cells. Dormant neurons are reactivated, and the restoration of certain brain functions is made possible.

Get in touch with us!

Get Our Free Brochure
Scroll to top Call Now Button
Cookies assist us in providing better services. By using our services, you consent to the use of cookies. I accept